Peace has many definitions

In Amuria District, Uganda, Amedo Judith keeps her ear to the ground, so that when conflicts emerge in her community, she is poised to intervene. When a girl asserted her sexual and reproductive rights by ending a pregnancy, and her father forced her and her mother from their home, jeopardizing the girl’s education, Judith took action. “People still have in their minds that girls are a source of dowry,” she explains. “If she conceived, that is already finished. She cannot go to school.” But Judith saw a different future for the young student.

Part of a growing movement of women peace advocates formally trained by the Women’s International Peace Centre, Judith is among 26 members of Orungo Women Peacebuilders Network. In the wake of decades of violent insurgencies in the region, women peacebuilders disrupt and address gender-based violence — including harmful traditions and human rights violations — to heal their communities and advocate for just outcomes for women and girls.

The Peace Centre is an SLF partner with projects in central and northeastern Uganda, with a mission to ignite women’s leadership, amplify their voices, and deepen their activism in re-creating peace.

“With the second chance she is given, she is going to perform wonders.”

“I was not invited,” Judith says, but the girl’s family agreed to a visit, a vital first step. “You go and introduce yourself and then tell them ‘This is what I do. Can we give it a try?’” Judith enlisted local leaders to support ongoing and successful mediation, and the girl returned to school. “I moved with my head up, held high … that was the best day,” she beams. “To take a girl child back to school, giving her a second chance rarely happens…. She’s like my daughter now…. I’m sure with the second chance she’s given, she is going to perform wonders.”

Judith leads with determination and warmth. At 37 years young, she has a decade of experience as a district councillor, representing youth and women. The Peace Centre promoted her political campaign as part of an initiative to build women’s leadership in communities affected by HIV and AIDS. Now, the mother of four is director of a school for children ages 5 to 16, where she dedicates time each week to mentor girls. And together with Orungo Peacebuilders Network, she regularly visits schools, raising awareness about peace building. “Peace mediation is very important to our communities, even in our own day-to-day lives …. Without this peacebuilding, I don’t know whether the world would be moving.”

“When we have peace in our communities, it means there is development.”

For Judith, peace has many definitions. “One is the ability to sit down and have your differences sorted out. Peace is a place where there is no war, no conflict.” As climate change and drought increase food and income insecurity, peace means “we have food to eat, we are not starving. There is rain.”

For people living with HIV, peace also means having access to anti-retroviral medication. For girls, it means going to school without fear, and not having to stay home while menstruating.  And for women, it means selling goods at market for a fair price and without intimidation.

Working without compensation, but with a profound and transformative impact, women peacebuilders address barriers to safety and success for women and girls. According to UNAIDS, when girls complete their education, they are 50% less likely to acquire HIV. “When we have peace in our communities, it means there is development,” Judith says, adding she is grateful to The Peace Centre for developing the program, which includes ongoing mentorship, and referral pathways for complex cases and legal issues. “Otherwise, we would just be … rural women seated down there in the village without anyone recognizing us, without us helping other people.” 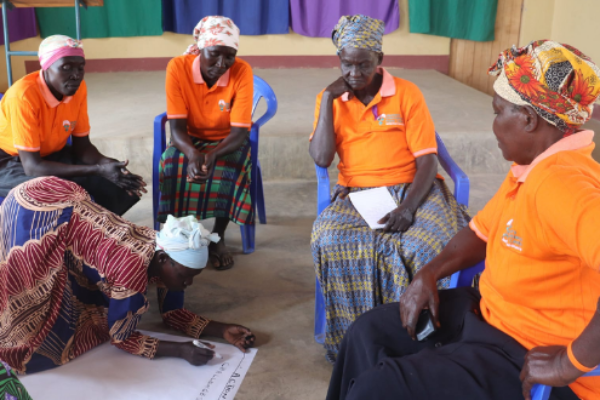 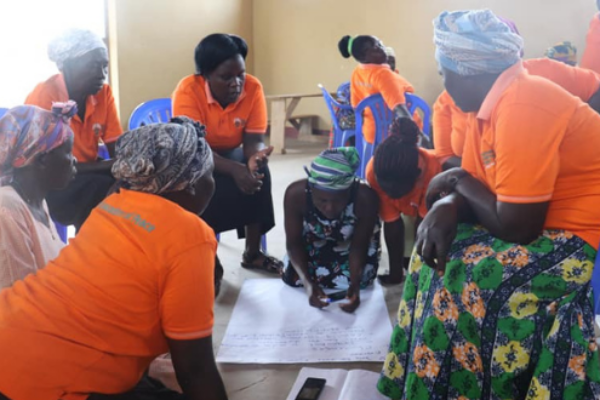 Amedo Judith, sitting fourth from the left, speaks with peacebuilders during training. Photo provided by The Peace Centre. 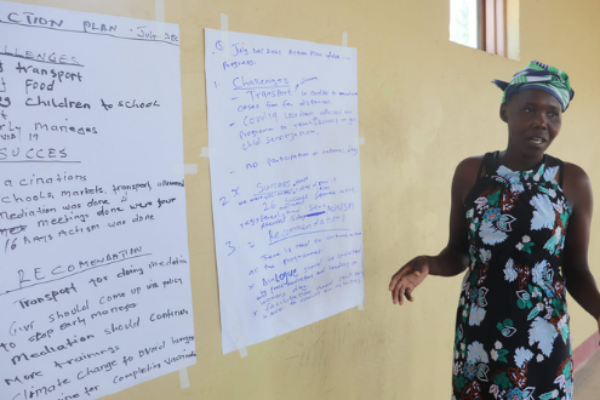 A peace advocate presents a list of challenges, successes, and recommendations for community peacebuilding work. Photo provided by The Peace Centre.